According to 2010 project report, Hands Together Cooperative: Created in the wake of the January 12th, 2010 earthquake. It is/was made up of. Their objective was to empower their members and attain economic independence through, specifically by, “earning livelihoods and establishing a social net.”

Hands Together Cooperative hopes to not only generate income for its members, but also to provide food, social, and residential support and security. Hands Together members are engaged in self-education and self-empowerment activities, including a daily literacy class. Through the Hands Together jewelry business, members will be pioneers in waste management and environmental education for fellow Petionville Camp IDP’s.

In the endeavor they were aided JP/HRO and Israelite organizations Tevel b’Tzedek IsrAid. The members were all living the IDP camp on the grounds of the Petion Ville Golf and Tennis Club. Camp managed by JP/HRO, of Sean Penn fame.

According to the report it was IsrAid.who “rallied to form a cooperative.” They then met weekly with a J/P HRO appointed project coordinator (Tenzin Manell). In July 2010, Gayle Shain, a J/P HRO volunteer from Chicago, IL taught the members to make beads from recycled magazine paper. The loan request says that Ms. Shain secured “three to five” (sic) outlets in the U.S. where their product “can be” sold. The report also included plans to expand membership and concluded that “With the proper capital, educational and strategic support.”

They concluded that, “Hands Together Cooperative has the potential to be replicated throughout Petionville IDP Camps.” Especially for “fellow IDP Camp residents who are aspiring entrepreneurs.” At the time the report was written they had “25-30 active members” (sic), male and female, ranging in ages from 18-70 years old, founded the cooperative It then went to say that the cooperative features 30 members mentored by Tenzin Manell, J/P HRO appointed project coordinator. Three Hands Together Cooperative members serve as coordinators:

It concluded with the rather optimistic assurance that, Once J/P has relocated the majority of residents living in Petionville Camp and has shifted toward being a Haitian run organization (after 18 months), Hands Together Cooperative members will have repaid this and future loans from Zafen.

There are some inconsistencies. First, how is it that they don’t know exactly how many “active” members they have. But ok, let’s accept that. Second they are from 18 to 70 years of age. But in the evaluation all 12 of 13 members were under 30, the remaining one was 38.
The report claims they are taking literacy classes. But in the evaluation all have at least a primary school degree; many have secondary and some are in University

Blogpost The History of Haitian Art 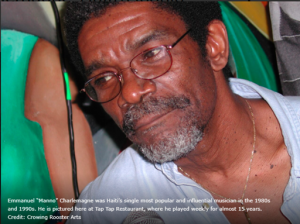